Blockchain is disrupting the way technology is evolving with the way businesses run. Nidhi Arora of Electronics For You, talks to Jitendra Thethi, assistant vice president – innovation, Aricent, about the power that blockchain holds. 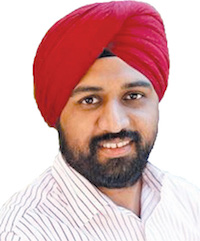 Q. What is blockchain, and why is it a trusted approach?

A. Blockchain is a distributed ledger technology. It is a trusted approach because transactions are validated by each participating node either by proof of work in a public blockchain or consensus algorithm in a private blockchain. All transactions written on the blockchain are permanent, leading to a system where data written is tamper-resistant.

Q. Tell us about the data structure and the encryption process in blockchain.

A. Blockchain is like a linked list wherein each block consists of a piece of data committed into the network, which contains a reference to the previous block—all leading to the genesis block.

As proof of work, all participating nodes try to find a hash that has certain patterns (like solving a mathematical puzzle) that can be easily verified by all nodes but, is difficult to compute. When the puzzle is solved, a block is committed, and subsequent data gets written on the next block.

Q. What are the different types of blockchain technologies?

A. There are use cases that determine whether a public or a private blockchain should be used in a solution. Open blockchain have high stability and visibility, and the data corresponding to a transaction is available to all. Additionally, every transaction cost is in terms of the cryptocurrency used in that public blockchain platform.

However, private blockchain needs to be operated in each of the participating organisations’ network and control. It also allows adopting a consensus algorithm that can support transactions on a larger scale.

Q. Which industry segments will be affected by blockchain?

A. All industries where cross enterprise visibility and reconciliation is required will benefit from blockchain technology. Supply chain visibility, financial transactions, asset tracking and registry, telecommunications, healthcare, airlines, logistics and transportation will hugely benefit from it.

Q. How is security taken care of within a blockchain network?

A. Blockchain enables security and tamper-proof capabilities for storing data and smart contracts. Any tampering of data attempted by a node or user in a block changes the hash of the block.

Q. Please explain the significance of Merkle trees in blockchain.

A. Merkle tree is a structure that enables efficient verification of data, to ensure that a transaction has not been tampered. It creates a hash of every transaction and then a hash of the transaction hashes, until one top-level hash value is reached.

Q. What networks are used to develop blockchain platform?

A. Common platforms are Ethereum, Hyperledger Fabric, Quorum and Exonumm.

Q. Highlight some business use cases for blockchain?

Q. What are the steps involved in implementing blockchain for a business?

A. First, identify business use cases that can benefit from the capabilities of such technology. Then, set up blockchain practice and infrastructure, and pilot use cases with other organisations and scale.

Q. What are the limitations associated with blockchain?

A. Limitations include evolving technology and standards, lack of consortium and industry ecosystems, and regulations slowing down technology adoption.